Colorado is a great state for many reasons, but thanks to the Denver Leadership Foundation, the Metro Denver Economic Development Corporation (EDC), and their affiliation with the Colorado Energy Coalition (CEC), Colorado businesses can take part in learning about the ever-expanding renewable energy market. This past week we visited SolarTAC in Watkins Colorado, which houses the largest solar technology testing and research facility in the United States: with 74 acres of land that gets nearly 300 days of sun a year, it’s the perfect place for engineers to explore modern solar energy technologies.

Attendees had the opportunity to hear from a panel comprised of key players in Colorado’s Energy Marketplace:

Scott Prestige, EDC’s Energy Industry Director, set the stage for the discussion in the center of an entirely solar-powered building on the premises of SolarTAC (photo) with a quick run-down of the day’s agenda and a briefing on the EDC/CEC’s endeavors. Scott is also a board member of both the Regional Air Quality Council and the Stapleton Development Corporation, as well as co-chair of the Advance Industries Accelerator Energy Review Committee.

Jeff Ling, Senior Policy Advisor at the Center for the New Energy Economy at CSU, acted as the group moderator by fielding questions and structuring the overall discussion. Working with state policy writers, Jeff keeps efforts geared toward the United State’s transition into cleaner energy and is the co-author of the book Powering Forward: Presidential and Executive Agency Actions to Drive Clean Energy in America. While attaining his masters at the University of Colorado, Jeff was the project manager for the 2005 winning Solar Decathlon Team (www.solardecathlon.gov/past/2005/gallery_homes.html), where colleges compete to create innovative structures that are fully solar-powered–CU donated their 2007 entry to SolarTAC, which became their visitor’s center.

Christopher Worley, Director of Policy and Research at the Colorado Energy Office

The conversation gained momentum from the get-go, and quickly became an eye-opening experience with regards to what the energy industry has to deal with on a daily basis. For instance, the overdramatized depiction of Fossil Fuels vs. Clean Tech in the war for resources by the media has become a common perception/misconception. Instead, Colorado and other states throughout the US have become a progressive and collaborative entourage of businesses on a mission to bring balance, sustainability, and efficiency to the energy industry as a whole. It was great to hear such rounded perspectives on how the industry became what it is today and whats in the works for the future.

Attendees also had the opportunity to tour the impressive pre-market test facilities with Al Choi, Manager of the Emerging Tech Research and Development Team at Xcel Energy: getting to see some of these projects in action was, as they say in the energy business, totally electrifying. All of the progressions and innovation centered around utilities, combined with the impact we as consumers have on energy industry, resulted in a newly-discovered enthusiasm for sustainable energies and the future.

Our group headed back into air-conditioning to hear from two trailblazing businesses working to clear the way for new innovation and tech in the solar power sphere. Kevin Morse with Clean Energy Collective shared with us the latest in solar community gardens, and showed us how neighborhoods, businesses, government agencies, and non-profit entities in Colorado have undertaken the construction of panels that help power entire zip codes. This is something we hope gets a lot of traction in Colorado and, ultimately, what becomes successful is dependent on the end user. We also heard from Steve Katsaros, Founder and CEO of Nokero: in his travels around the world, Steve felt deeply moved by those who did not have access to any kind of electrical energy and had to burn kerosene for light. This not only contributes to environmental damage, but it also costs the people who already struggle to pay for life’s necessities. Steve saw these people spending almost half their money on what amounts to a temporary answer to a permanent problem. He brought a sample of the solution: 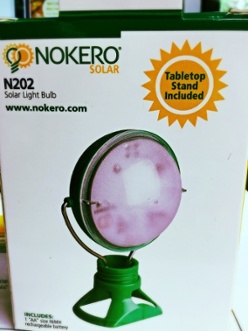 A solar light, made for about the same cost as the kerosene tins, has had great success in the sample markets he’s tried so far. It is so wonderful, inspiring, and hopeful to see genius and innovation working together to create a better, cleaner, more efficient world.